According to his military service record, James Littlewood was born in the parish of Mulabrac (now Mullaghbrack) in County Armagh, Ireland. He was about sixteen years' old and a weaver when he enlisted with the 7th Dragoon Guards in Armagh on 26 Mar 1796.

The regiment's headquarters frequently moved location: initially south through Ireland, then north through England to Edinburgh, eventually returning to Ireland. Over the 25 years following his enlistment, the regiment followed this anticlockwise circuit three times. The "Historical Record of the Seventh or Princess Royal's Regiment of Dragoon Guards", by Richard, Cannon, published in 1839, provides a detailed description on pages 57-65 of the events during his service.

While stationed in Birmingham he met Elizabeth Bickerton from Wolverhampton and they were married on 25 Jan 1803. As was typical of the time, Elizabeth must have travelled with the regiment because they had three children baptised in Newcastle (Mary Ann in May 1804), Sandwich, Kent (William in February 1812) and Preston (Robert in April 1820). They may have had other children during the years 1806-1809 and 1814-1818 while the regiment was in Ireland but no records have been found yet or perhaps Elizabeth did not travel there.

Some 14 years and 3 months after enlisting, James was promoted from Private to Corporal on 1 Jul 1810.

Following the end of the Napoleonic Wars, the British Army was reduced in size. On 20 Aug 1821 the 7th Dragoon Guards was reduced to six troops and as a consequence James was discharged after 25 years and 7 months of service. His service record described him as "...five feet eight inches in height, fair hair, grey eyes, fair complexion...".

James and Elizabeth went to live in her home town of Wolverhampton where they had two more children: Elizabeth (about January 1823 but died August 1830) and Harriet (about August 1827).

On 27 Dec 1840 Elizabeth married for a second time: to a widower named William Chadwick. He was a stonemason and had fathered eleven children by his first wife. Unfortunately he died in August 1844. 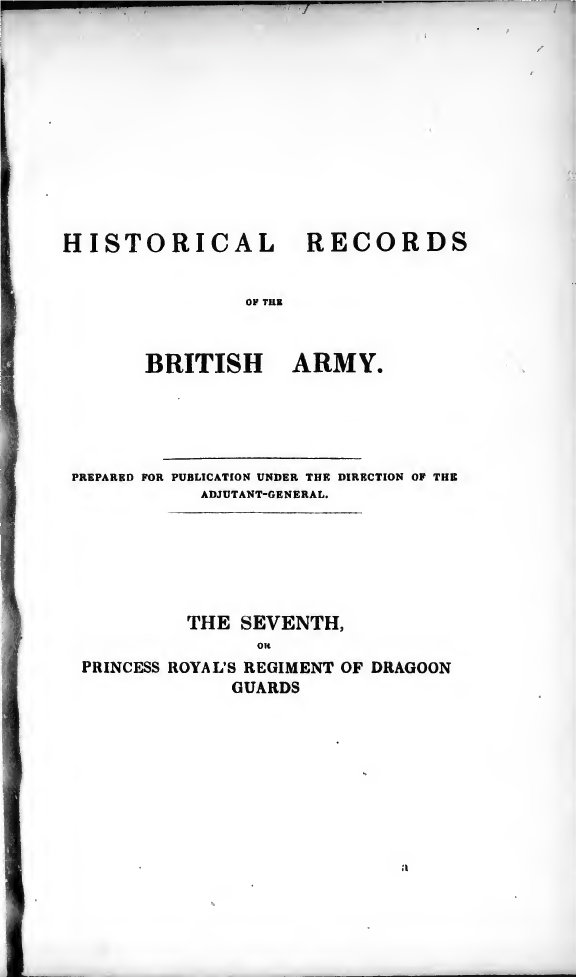 The head quarters were removed in March, 1796, to Longford; and in November following Sir Ralph Abercromby was removed to the Scots Greys, and was succeeded in the colonelcy of the PRINCESS ROYAL'S DRAGOON GUARDS by Lieut. General Sir William Medows, K.B., from the seventy-third foot.